Hajj, known as the greater of the two forms of pilgrimage (see Umrah, the lesser pilgrimage), takes place in the last month of the Islamic lunar calendar – Dhu Al-Hijjah. Muslims are expected to make at least once during their lifetime, if indeed their means, circumstance permits them to do so. It is said to be the largest annual pilgrimage in the world, with 2.35 million pilgrims from across the world performing it last year alone.

Hajj is both a collective undertaking and a deeply personal experience. It involves a series of rituals around Mina, Arafat, Muzdalifah over a period of 5 or 6 days.

The rituals have their origins in the time of the Prophet Ibrahim (Upon Him Be Peace). Prophet Muhammad (Peace Be Upon Him) led the Hajj himself in 632AD.

Entering the holy city of Makkah, the journey begins…

It begins with pilgrims arriving in the Masjid al-Haram in Makkah. 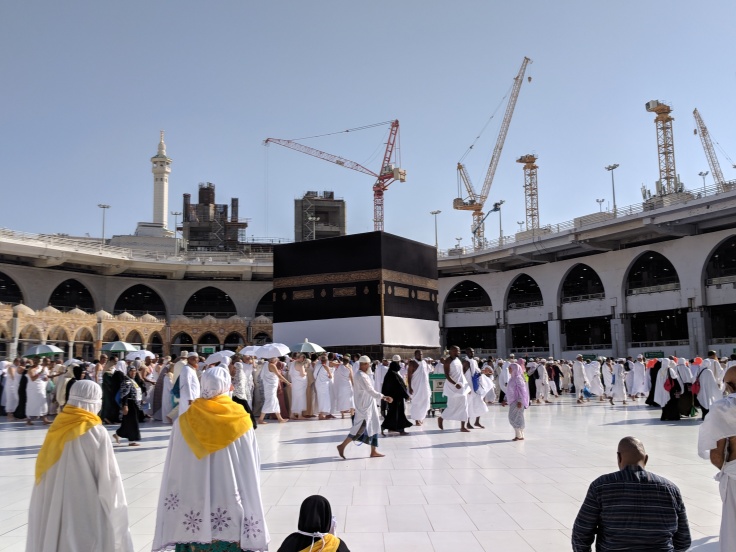 At the centre of the Masjid Al-Haram in Makkah is the Kaaba, around which pilgrims perform Tawaf, circling the Kaaba seven times in anti-clock wise direction. During tawaf, pilgrims will recitate supplications, prayer and the Talbiyah. The purpose of Tawaf is to symbolically represent the idea that our life should revolve around thinking and remembering Allah Almighty.

In Islamic tradition, Abraham (Ibrahim) was commanded by Allah to leave his wife Hagar (Hajar) and their infant son, Ishmael (Isma’il), alone in the desert between Safa and Marwa. When their provisions were exhausted, Hagar went in search of help or water. To make her search easier and faster, she went alone, leaving the infant on the ground. She first climbed the nearest hill, Safa, to look over the surrounding area. When she saw nothing, she then went to the other hill, Marwah, to look around. While Hagar was on either hillside, she was able to see Ishmael and know he was safe. However, when she was in the valley between the hills she was unable to see her son, and would thus run whilst in the valley and walk at a normal pace when on the hillsides. Hagar traveled back and forth between the hills seven times in the scorching heat before returning to her son. When she arrived, she found that a spring had broken forth from where the archangel Gabriel (Jibra’il) hit the ground with his wing as both sustenance and a reward for Hagar’s patience. This spring is now known as the Zamzam. (source)

And so, once their Tawaf is complete, pilgrims will walk between the hills of Safa and Marwa seven times to commemorate this advent.

Safa and Marwa are mentioned in the following Quranic verse:

“Behold! Safa and Marwa are among the Symbols of Allah. So if those who visit the House in the Season or at other times, should compass them round, it is no sin in them. And if any one obeyeth his own impulse to good,- be sure that Allah is He Who recogniseth and knoweth.”

Once pilgrims have completed their premiere Tawaf and sa’i between Al-Safa and Al-Marwa, and as dawn breaks on the 8th of Dhul Hijja, they make their way to Mina, the ‘city of tents’, situated 7km east of the Masjid al-Haram in Makkah. It is here that pilgrims will undertake their daily prayers, remain immersed in worship.

As dawn breaks on the 9th of Dhul Hijja, pilgrims make the 14.4 km journey from Mina to the plains of Arafat, Mount Arafat itself, or Jabal al-Rahmah (Arabic: جبل الرحمة; ‘Mount of Mercy’), also known as Mount Arafat, the scene of the Prophet Muhammad’s (PBUH) final sermon. Pilgrims spend the day here in remembrance of their Lord, repenting for their sins and seeking His mercy. Many muslims around the globe, who are not performing Hajj, choose to fast on this day. The Day of Arafat is considered one of the most important days, not just of Hajj, but of the Islamic calendar.

After sunset, the pilgrims will make their way to Muzdalifah – a 9 km trip – where they spend the night under the stars. Many will also begin collecting pebbles here for tomorrow’s rites at Jamarat, departing again just before sunrise.

This day starts by casting stones at Jamarat, three stone pillars which are pelted as a compulsory ritual of Hajj in emulation of the Prophet Ibrahim (upon him be peace). They represent the three locations where Ibrahim (upon him be peace) pelted the shaytan (Satan) with stones when he tried to dissuade him from sacrificing his son, Ismail (upon him be peace). The pillars are called ‘Jamarat-al-Ula’, ‘Jamarat-al-Wusta’ and ‘Jamarat-al-Aqaba’. Throwing stones in Jamarat reminds the pilgrims to be conscious of temptations and act against them, to counter our nafs, or lower self, and to remain steadfast in serving God.

Pilgrims must then slaughter a sheep, goat, cow or camel – or pay for it to be done in their names. Eid Al Adha symbolises the devotion to God and a commitment to help the poor and the needy. The symbolism is as well in the attitude — a willingness to make sacrifices in our lives in order to stay on the Str and please God.

After Eid, pilgrims will return to Makkah to perform the final circulation of the Kaaba, a ‘farewell’ tawaf.

Hajj is more than a series of rites to be undertaken, Hajj is founded on the tenants of spirituality, unity, equality and simplicity. Pilgrims performing Hajj are known as the ‘guests of God’. It is, ultimately, a pilgrimage aiming to revitalise the pilgrim’s love for their Lord in their heart, seeking His mercy and forgiveness for all their transgressions.

Hajj is the last pillar of the Five Pillars of Islam. The five pillars being:

Many steps lead us to Hajj, bring us closer to Allah. These steps can be followed through the order of the pillars. After the shahada their is prayer, a concrete action that illustrate the love of the worshipper in his/her daily life; charity will improve and purify your soul, whilst fasting is the expression of your devotion, then comes pilgrimage where you worship in the symbolic abode of your Creator.

“The daily prayer, Hajj, circumambulation, and the other rites are aimed at remembering Allah. But when there is no remembrance of Him in your heart, what value will your oral remembrance have?” [Hadith Qudsi]

From all over the world, people converge unto the same place, at the same time of year in order to perform the same act of worship: Hajj. Hajj is a perfect illustration of the universality and beauty of Islam, the construct of ‘Umma’ is brought to life before one’s eyes. It’s a unique, very powerful and immersive experience, where you feel a strong connection with fellow Muslims through your supplications, prayer and the recitation of Talbiya (Labbayk Allah). This is the beauty of Hajj, to be  connected to God and connected to one another – one Ummah (community), one body, one faith, one heart.

Wearing simple clothes is essential, the Hajj is performed in a state of Ihram. In addition to the simplicity of the attire that must be worn, is the simplicity and piety of the manner in which a pilgrim must behave; stripped of worldly possession, and immersed in worship, the pilgrim exists in a supreme state of simplicity – even the accommodation is reflective of this, Mina is a temporary camp, for example.

“Be in this world as though you were a stranger or a wayfarer.” [Bukhari]

Be it under the tents in Mina, or as pilgrims congregate on the plains of Arafat, during Hajj, every pilgrim worships as an equal to their brother or sister, equal in the eyes of their Creator – your worldly station matters not.

For those preforming Hajj, may it be accepted by Him, and for those who have not been blessed with the opportunity as of yet, may He call you to Him in due course, give you the opportunity to perform this beautiful pilgrimage, inshAllah! On this day, the 8th of Dhul Hijja, may all our duas be accepted, our sins forgiven – may we all be in receipt of His mercy inshAllah! 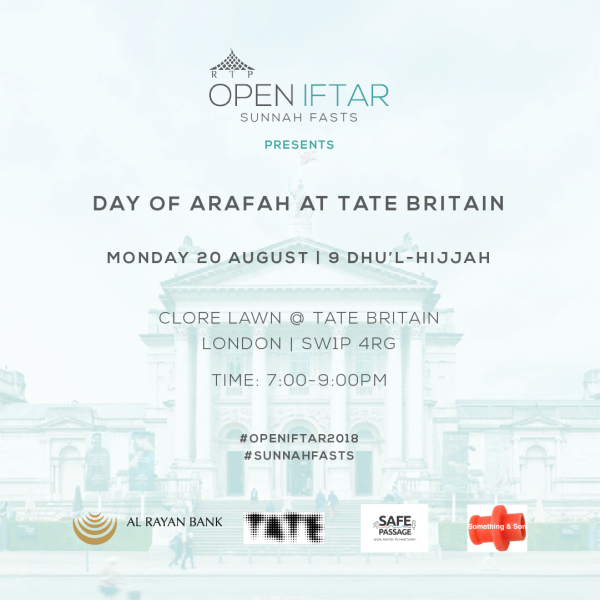 We are honoured to be collaborating with Something and Son to deliver an Open Iftar Sunnah Fast on the Day of Arafat, as part of their ‘A Common Ground’ exhibition at Tate Britain.

20th August, save the date!